“The EDC draws strength from its investors and volunteers and the contributions of this year’s award recipients were particularly strong,” said EDC President and CEO Lynda L. Weatherman. “Whenever the EDC asks for his help, Neal Johnson stands as a ready, willing and able community leader. The Space Coast is a better place because of him. Angela Neal, too, exhibits a solutions-oriented attitude that makes our community more military-friendly and improves our ability to tap the talent brought here through service to our country. Thank you both for your efforts.” 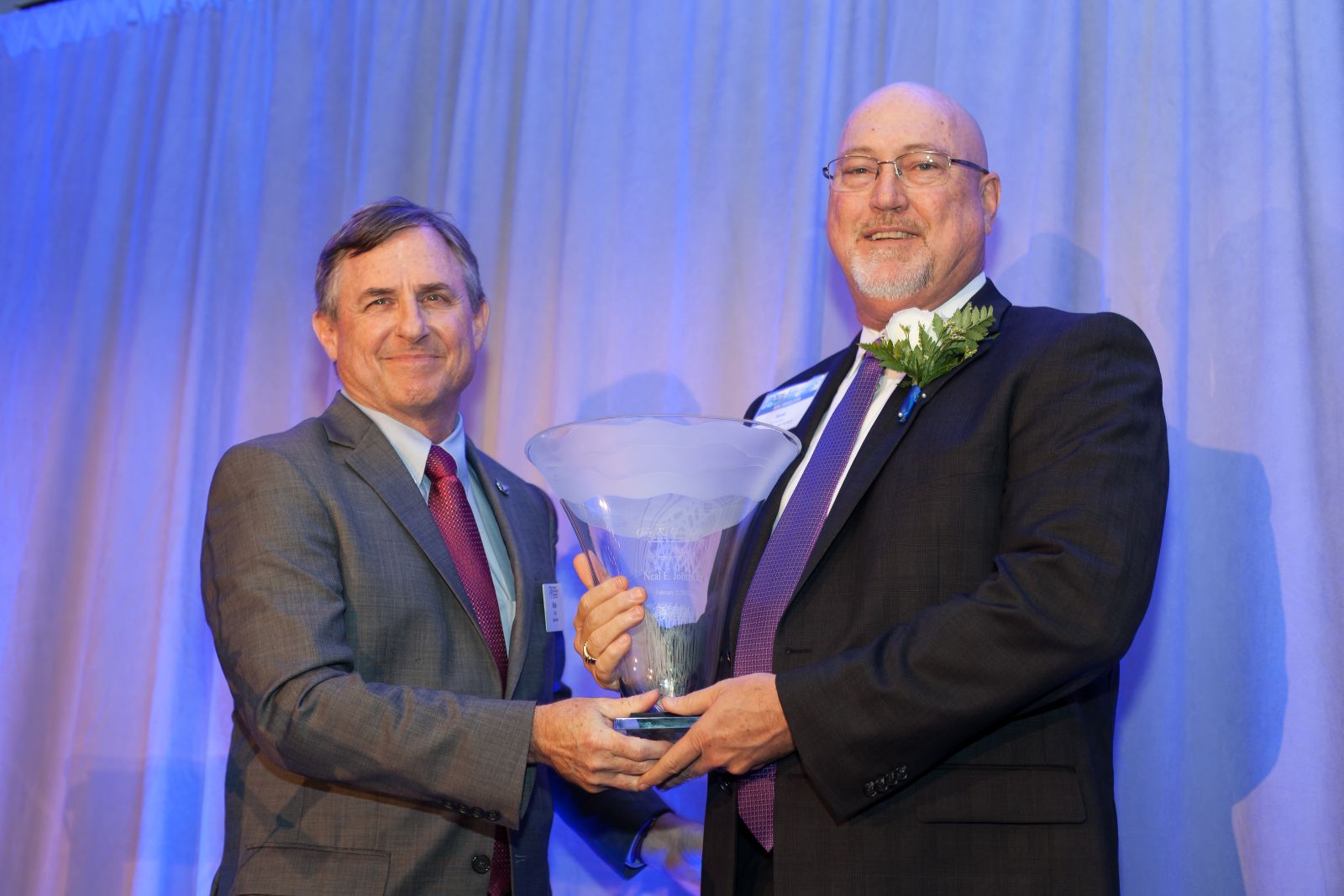 “Brevard County enjoys the vibrant economy that it does because of those that had the foresight many years ago to create an organization that wakes up every day thinking about economic development and what that means to our continued prosperity. It was Gary R. Cunningham and many others like him that had that vision to create what we know today as The Economic Development Commission of Florida’s Space Coast. On that foundation we have built an organization that goes head-to-head with much larger EDC’s to recruit, expand and retain high paying, high tech jobs for our community and because of that we are what I consider the premiere place in the United States to live, work and play,” said Johnson.

The Gary R. Cunningham Distinguished Service Award for Economic Development was established in 2006 and is presented to an individual who has made long standing, consistent, and highly valued contributions to further economic development through community efforts on the Space Coast. Johnson joins individuals such as William Potter, Bjornar Hermansen, Eugene McCarthy, Robin Fisher, Fred Sutton and Bill Ellis in receiving this prestigious award.

“It is truly an honor and very humbling to receive this award named after Gary. It has been a privilege over the years to get to know so many people that share his vision, which I intend to continue. I want to thank the Officers, Board of Directors and Staff of the EDC for this tremendous recognition, and I hope this serves as an inspiration to the many others that support this great organization.” continued Johnson.

Johnson has been a consistent supporter of economic development efforts on Florida’s Space Coast for over two decades. In addition to serving multiple positions on the EDC’s Board of Directors, he has spent time attending important policy meetings, new business relocation and expansion announcements, and many legislative visits to Washington D.C. to advocate for economic development throughout Brevard County. In addition, as Chair of the Board for the EDC in its Fiscal Year 2004/2005, Johnson played a key role in the EDC’s successful efforts to keep Patrick Air Force Base off the BRAC closure list – reversing the decision to close the Naval Ordinance Test Unit. This has proven to be a huge win for Brevard County, resulting in the addition of thousands of jobs over the years. 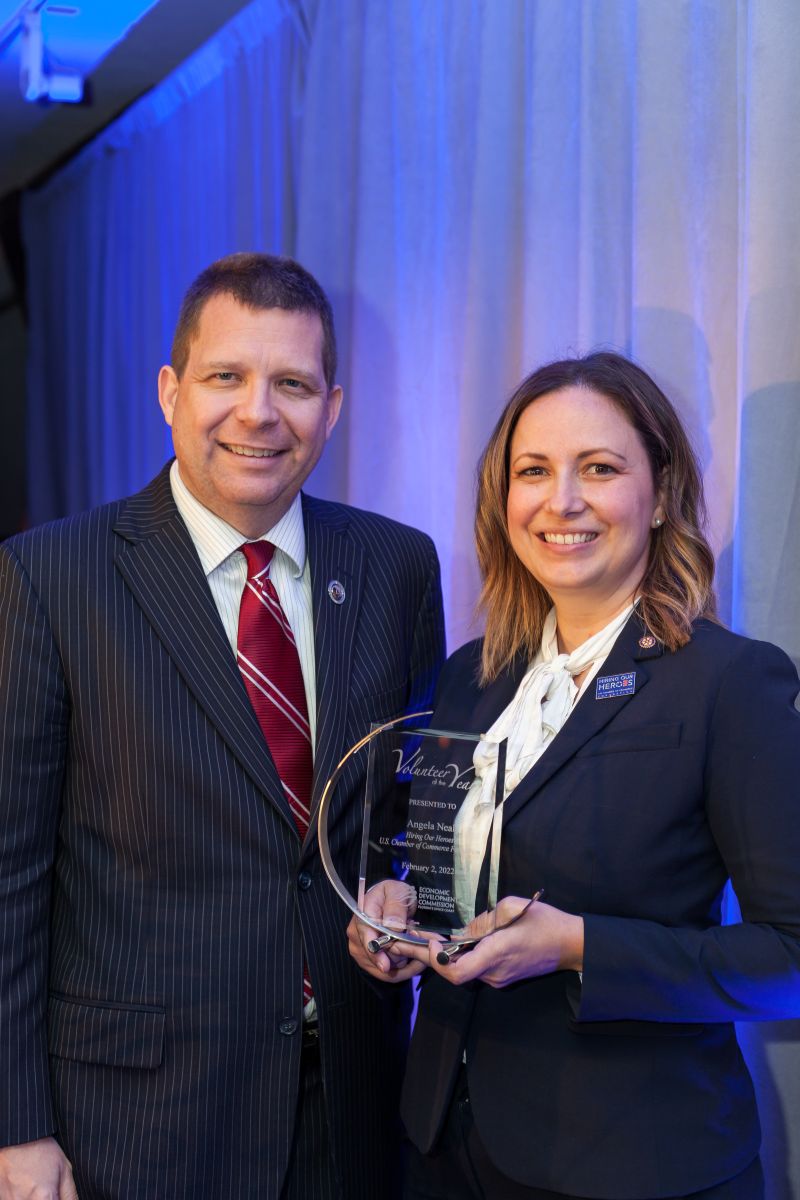 The EDC’s Volunteer of the Year award is presented annually to an individual who has gone above and beyond the call of duty for the betterment of the Space Coast. Neal, Sr. Manager, Military Spouse Economic Empowerment Zones Hiring Our Heroes, U.S. Chamber of Commerce Foundation, played an integral role in the EDC’s military advocacy efforts during the organization’s 2020/2021 Fiscal Year. Neal, a military spouse living on the Space Coast, assisted with valuable content, and actively recruited other military spouses to bring even more valuable feedback to help the EDC produce a military-friendly guide on SpaceCoastSalutes.com. In her professional capacity, Neal worked with the EDC to establish the Space Coast Military Spouse & Veteran Working Group and later the Space Coast Military Spouse Economic Empowerment Zone, which will launch later this spring. The impact of these efforts will not only help talented individuals who have served our country fill openings in our workforce, but help Brevard County retain and attract a larger military footprint.

“It is humbling to receive the volunteer of the year award from the EDC. I am fortunate to be surrounded by people that are making significant strides in local and national communities daily so when I received this award it took me by surprise, and I do not take it for granted,” said Neal. The work I have done for the military community on the Space Coast is not done alone as I have strived to be the spark that ignites the fire. I’d be remiss if I did not thank Shelby Kenny, Katie Garcia, and Jaime Rhude for sharing their most valuable commodities—their time and talent; as well as Julia Williford, Pamela Davis, John Roy, and Michelle Goldcamp, Rockledge Rotary, LEAD Brevard and my husband and kids for being part of this journey. Thank you to the entire EDC team for this recognition and support, I look forward to continuing these efforts on the Space Coast.”

To learn more about the winner and the EDC’s Annual Meeting, visit www.SpaceCoastEDC.org/AnnualMeeting2122

The Gary R. Cunningham Distinguished Service Award for Economic Development, awarded by The Economic Development Commission of Florida’s Space Coast (EDC) is presented to someone who has made long standing, consistent, and highly valued contributions to further economic development through community efforts on the Space Coast. Former CEO of Cunningham, Ingram and Anderson, Inc., Gary Cunningham began with a background in petroleum distribution, auto parts wholesaling, and economic development. In 1974, Gary turned his focus to industrial facility development, becoming the VP of Industrial Development for the Daytona Beach Area Committee of 100. In 1980, he turned his energy to the fast growing Space Coast in Brevard County. He developed and leased more than 500,000 square feet of predominately high-tech facilities in less than a decade. In 2006, the EDC created the Gary R. Cunningham Distinguished Service Award for Economic Development in honor of this exceptional business leader and his tireless efforts in support of economic development.